Getting teenagers to share the gospel is easier said than done. You try different sermon series and Bible studies to get your kids on mission. You remind them every week in youth group that they need to share their faith. Still, it feels like your efforts are falling on deaf, apathetic ears.

You might be doing all the right things as a youth leader, and you probably have students who genuinely want their friends to know Jesus! But the longer your students go without taking THE Cause of Christ seriously, you start to wonder, what’s the missing puzzle piece?

Learning to Work Together at Lead THE Cause

It was a hot, humid afternoon in downtown Austin. Youth leader Tara Jones was walking in the Texas heat with students who were attending Lead THE Cause (LTC) that week. After undergoing intense evangelism training, they’d been assigned Congress Street as their outreach “turf” for the day.

“I split them off in pairs and allowed them to freely go and share the gospel with people,” Tara said. “I wanted them to go and not necessarily fail, but I didn’t want to be their backup. We wanted to kind of throw them out in the wild and let them learn.”

You might expect that kind of outing to share the gospel with strangers in a new city to leave teenagers frozen with fear. But when Tara sent her students out on Congress Street, she saw boldness and courage shine through as they engaged strangers in gospel conversations.

“My group was killing it!” she said with excitement. “Two of my girls sat down at a pizza shop with a woman who was sitting by herself and had a great conversation with her.

“…when one of them would run out of things to say, the other girl would jump in perfectly and fill in the gaps.”

“They came back so excited. That was their first gospel conversation, and they said that when one of them would run out of things to say, the other girl would jump in perfectly and fill in the gaps.”

Later that afternoon, Tara’s group met a young woman selling temporary henna tattoos and they decided to work together to tell her about Jesus.

“The kids decided they would buy henna tattoos from her,” Tara explained. “They wanted to buy her time to share the gospel with her, one after another. After a few of our students opened the conversation and started getting to know this girl, a boy and a girl from our group teamed up to present the gospel to her.”

“The boy specifically got the biggest tattoo known to mankind so he could have more time to talk with her about Jesus, which I thought was so cool!” Tara said with a laugh.

“The kids worked as a team. As the boy was getting his giant tattoo, the girl was sharing her testimony. Then the boy shared the gospel with the henna girl and gave her a Life in 6 Words outreach book to help break down the gospel for her.”

Why were Tara’s students able to share their faith with such boldness that day? How did they overcome the fears that keep most teenagers from opening their mouths about Jesus?

As the students worked together in those conversations, they were learning that they were not alone. They had others next to them on the same mission to share the gospel on Congress Street, and it empowered them to share their faith courageously that day.

“Two Are Better Than One”

It could be this kind of team-oriented support system that students are craving when it comes to evangelism.

It’s something that even Jesus implemented when He sent the Twelve Disciples on a dangerous mission in Mark 6. They were to go and tell the Israelites to repent and get ready for the Messiah, and here’s what Jesus tells them:

“Calling the Twelve to him, he began to send them out two by two and gave them authority over impure spirits. These were his instructions:

‘Take nothing for the journey except a staff—no bread, no bag, no money in your belts. Wear sandals but not an extra shirt. Whenever you enter a house, stay there until you leave that town. And if any place will not welcome you or listen to you, leave that place and shake the dust off your feet as a testimony against them.’”  Mark 6:7-11 (NIV)

These twelve guys wouldn’t know where their next meal would come from, where they would sleep, or even if they would live to see another day (see Matthew 10 for more details on this mission). But as they embarked on this physically, mentally, and spiritually difficult journey, we see Jesus sending them out two by two.

He made sure they were traveling with a friend who had the same heart and same mission. The pairs could keep each other company, encourage one another, hold their partner accountable, and make their witness about Jesus stronger than if only one of them were preaching.

This lines up with Solomon’s wise words from Ecclesiastes 4:9-10 that say, “Two are better than one, because they have a good return for their labor: If either of them falls down, one can help the other up.” 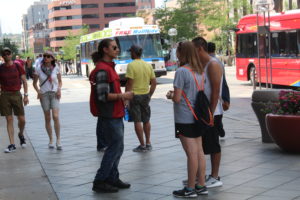 At LTC, students learn to work alongside each other to bring the gospel to strangers they meet during outreach.

To be sure, God absolutely can and will use willing teenagers to spread the gospel, whether they have a teammate by their side or not! However, Tara’s students were able to encourage each other and navigate gospel conversations more effectively because they were working together, just like the original disciples did almost 2,000 years ago.

Lead THE Cause is an incredible week where your students will be trained and equipped to boldly share the gospel like Tara’s group did. If you want to see your teenagers working together to advance God’s kingdom, request an info kit to find out more about Lead THE Cause today!

Madison Lewis is a graduate of Colorado Christian University where she studied Business Administration and Communication. She loves getting to help tell Dare 2 Share's ongoing story using her passion for Christ, love for people's unique stories, and youth ministry experience.

Signup now and get notified when a new blog posts! 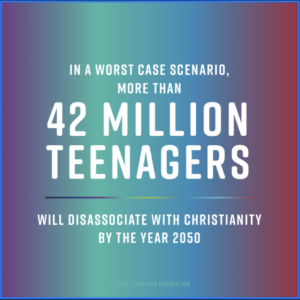 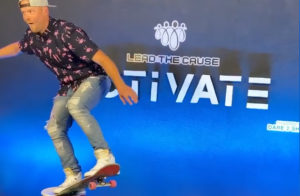 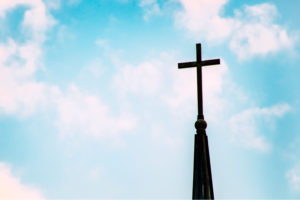 Lead THE Cause Blog